The Cooper Nuclear Station, owned and operated by the Nebraska Public Power District, is located just south of Brownville, Nebraska on the Missouri River. The Brownville Recreational area, the Indian Cave State Park, and Steamboat Trace Trail are within the 10 mile EPZ (emergency planning zone).

The plume emergency planning zone (EPZ) is a ten-mile radius around the plant and is shared by the states of Missouri and Nebraska. Nebraska counties falling within the plume EPZ are Nemaha and Richardson counties. The ingestion EPZ is a 50-mile radius around the plant. Nebraska counties falling within the ingestion EPZ are Cass, Gage, Johnson, Lancaster, Nemaha, Pawnee, Otoe, Richardson, and Sarpy counties. 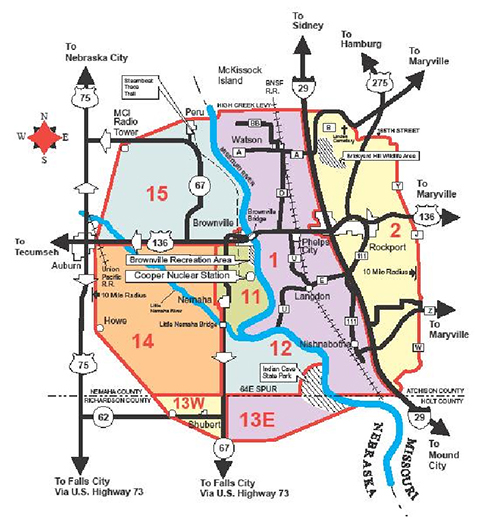 In the event of an evacuation, those needing shelter would go to either the Falls City High School at 1400 Fulton Street in Falls City or the Nebraska City Middle School at 1st Corso and 9th Street in Nebraska City. A map of evacuation routes may be found in the Emergency Planning Brochure located inside the Cooper Nuclear Station yearly calendar (or as a link from this website). The American Red Cross provides support for evacuees in shelters in both Falls City and Nebraska City.

Should an emergency occur at the Cooper Nuclear Station, sirens will sound a steady tone for three to five minutes which will alert residents in the EPZ to turn on their radio or television set for information. Rural residents may also be alerted when their Emergency Alert Radio (EAS) tone-activated radio automatically turns on.

There are four levels of emergency classification levels. These include: Unusual Events, Alert, Site Area Emergency and General Emergency.

Questions may be directed to your local County Emergency Management Director (Nemaha, Otoe, and Richardson Counties) or contact NEMA - Technical Hazards at (402) 471-7421.