The outbreak of two wildfires in the Nebraska Panhandle, less than 75 miles apart, turned into a statewide effort to achieve containment and suppression. Reported only hours apart, the two major wildfires broke out in Dawes and Scotts Bluff counties. The Post Fire was located five miles south of Crawford, and the Vista Trend Fire was located southwest of the City of Scottsbluff. Together, both fires burned a cumulative 8,236 acres.

More than 500 firefighters from across the state and other resources from Kansas, South Dakota, Colorado, Utah and Oregon worked for almost a week to achieve 100 percent containment on both fires.

Various local, state and federal resources collaborated to combat a variety of challenges that came with having two significant incidents only miles from one another. A state Type III Incident Management Assistance Team deployed to each location to assist in response operations. Gov. Pete Ricketts issued an emergency declaration Sept. 17, in support of response efforts. 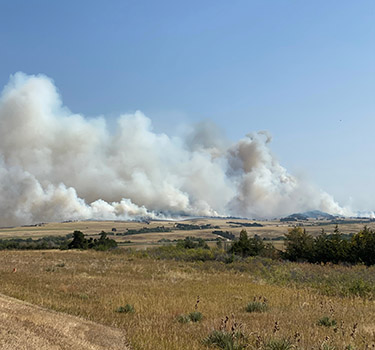